You are probably aware of digital assets such as Bitcoin, Ethereum and maybe even NFTs. However, have you heard of earning while playing a game? This case is made possible by Axie Infinity.

Axie Infinity is a breeding and strategy game where players control battling pets called Axies. However, what is it? How does it work? Let us delve into the Axie Infinity universe. 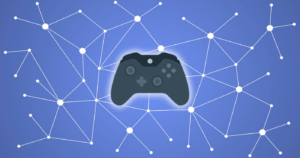 The blockchain technology is decentralizing the gaming industry (Source: Medium)

Before we get into what Axie Infinity is, we will do a quick recap about blockchain technology as the driving force behind this game.

By now, you probably know that blockchain is a way of managing a ledger of records in a decentralized manner. If you still have questions about what this term means, you can read our previous explainer articles.

Before the introduction of blockchain technology, gamers were used to pay-to-play and free-to-play games. You could subscribe to the gaming service providers to access gaming assets. At best, you could play free. Even then, you would trust the gaming service provider with your data. Additionally, those central authorities would have absolute power over the running of the game. They could change the game features whenever they want, or even restrict, without question, who plays the game and how.

However, the introduction of the blockchain has changed that. You can now have more control in the creation and running of the game that you are playing. Think about a game where the players set their own gaming rules and even create their gaming characters. Additionally, they can earn while playing the game. More importantly, the players have total control over your data. That is the environment blockchain gaming has created.

Leading this revolution is Axie Infinity.

What is Axie Infinity? 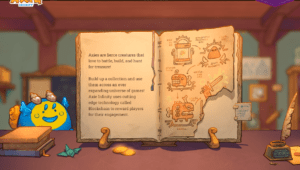 Axie Infinity is a game that runs on the Ethereum blockchain. The game revolves around Pokemon-esque creatures called Axies. You can collect, breed, raise, battle, and build kingdoms of the Axies. What makes Axie Infinity special is how it blends the standard online gaming and blockchain technology. It gives power to the hands of the individual players while maintaining the traditional online gaming mojo. The blockchain-based game allows players to win their virtual gaming assets. Additionally, the game rewards the players for playing. But, how does Axie Infinity achieves this? The secret is in the NFTs.

Axies (the in-game assets) are NFT-backed

NFTs, short for non-fungible assets, are unique digital assets used to prove ownership of digital files or other assets. These special and unique tokens can represent any asset including in-game characters.

NFTs exploded in popularity in 2021. However, several video games had already been built in this relatively new space before many people took notice.

When NFT collectibles hit the mainstream, the crypto game Axie Infinity by Sky Mavis took off. And, when the hype was ending, Axie Infinity got even bigger.

Axie infinity uses NFTs to represent the in-game assets – the avatars (Axies) and the plots of land in the game. Once you have bought an in-game item, NFTs will grant you sole ownership. NFTs protect the authenticity of your asset since no one can duplicate it. In a real-world scenario, you would think of an NFT as a title deed to a piece of land.

NFTs allow you to trade your in-game assets on the game’s marketplace for real money. It is similar to Beeple selling his Everydays: the First 5000 Days art. In both cases, the NFT token is changing the ownership so is the represented digital asset.

Since you have a way to prove the ownership of your assets, you can improve their features to increase their value. It is like buying land and developing it to improve its value. In Axie Infinity, that means breeding your Axies and creating a more powerful team that would yield additional NFTs to sell on the marketplace.

Some Axie NFTs have sold for 1500 ETH, which translates to about $4.7 million at the time of writing. 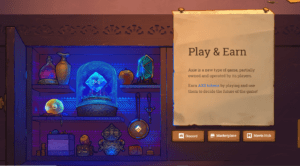 Play-to-earn is a new model in the gaming industry. Initially, there was no way you could earn directly from online gaming. Instead, you will spend hours playing and building your profiles without any financial benefits.

However, the arrival of the play-to-earn business model allows online games to reward participants who add value to the game. Therefore, you have an avatar and improve its performance, and the system automatically rewards you. Not to forget, you can sell the avatar in the end and make profits.

The play-to-earn model is predominantly based on the freemium model. That means you can join the game for free and start paying for new features, gears, and content to progress more quickly through the game. Any improvement you make on your asset increases its value. Therefore, you can make a profit by winning more games, or selling your assets.

Currently, Axie Infinity does not follow the typical free-to-play mode as they require you to have at least 3 Axies to start playing. That means you will have to buy these assets to join the game. However, reports suggest that Axie Infinity is planning to release free in-game assets – starter monsters – to attract new users who are unable to invest in the game upfront. However, such granted starters would not be able to earn the player that many reward tokens. Nonetheless, it would be a good way to kick start with the popular gaming platform.

Any decentralized ecosystem requires tokens to help in running the activities. In most cases, such platforms use a native token. Likewise, Axie Infinity uses tokens for governance and reward.

Axie Universe uses Axie Infinity Shards ($AXS), an Ethereum ERC-20 token, as the governance token. You can think of this token as the native currency of the game. The $AXS holders can claim rewards for staking their tokens, playing the game, and participating in the governance voting. This token enables the decentralization of ownership and governance of Axie Infinity. AXS has a total supply of 270 million.

Another important token is the Smooth Love Potion (SLP), which is a reward token within Axie Infinity. You will receive all your rewards in these tokens when you play the game in battle or adventure mode. SLP is also an ERC-20 token and carries value just like any other cryptocurrency coin. Additionally, It is tradable on cryptocurrency exchanges. Unlike AXS, SLP tokens are not caped, that is people can mine as many as possible.

Apart from the avatars (Axies), the virtual plots within Lunacia, the Axie homeland is also tokenized. These plots are called Terra and act as home bases of operation for the Axies.

Once fully developed, players will be able to buy, rent, and even develop these virtual plots of land. Players will also find AXS tokens on their plots and other resources. While this concept is still under development, you can see that it is a game-changer within Axies Infinity

Bridging the gap between the decentralized cryptocurrency world and online gaming through Axie Infinity creates a total shift in the future of online gaming. It allows for decentralization in the game as well as digital ownership. Consequently, it moves the gaming industry to a play-to-earn model, where gamers earn from playing games they enjoy. With the development of this game still going on, it will be interesting to see what the future holds for Axie Infinity and the entire blockchain-based gaming industry.