The BSC platform provides a simplified way for developers to build DApps. It also allows users to manage their digital assets across different blockchains ecosystems in large volumes with low latency.

BSC integrates the Ethereum Virtual Machine (EVM), making it compatible with Ethereum-based DApps and bringing the best of Ethereum to BSC. This compatibility has seen many developers migrate their projects to the cost-effective BSC to leverage the network’s lower gas fees and scalability.

The History of Binance Smart Chain

BSC’s well-timed launch during the decentralized finance (DeFi) revolution saw many developers build new projects on the blockchain. This concept of building projects has become a theme of the BSC, with Binance Exchange’s CEO, Changpeng Zhao aka CZ, fervently promoting it on Twitter as #BUIDL. 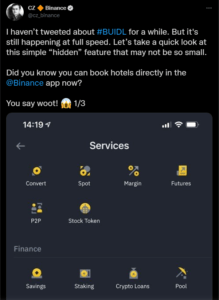 The Binance exchange and BSC both share BNB (Build N’ Build) coin as their native tokens. The change from BSC to BNB Chain aims to free up Binance’s ties to the decentralized blockchain. In addition, BNB Chain aims to have a self-sustaining ecosystem independent of Binance.

BSC supports smart contracts that run on Ethereum. As such, developers can seamlessly build and migrate DApps and other blockchain infrastructure across Ethereum and BSC. With EVM compatibility, developers can port their projects from Ethereum to BSC, thereby accessing popular Ethereum DApps like the MetaMask Wallet.

The BNB Chain comprises two parts – the BNB Beacon Chain and BNB Smart Chain. Despite running parallel to each other, BC (now BNB Beacon Chain) and BSC (now BNB Smart Chain) integrate with barely any friction. Furthermore, BSC leverages interoperability to ensure developers and users can access and swap more digital assets on BC for BEP-20 tokens on BSC.

Runs Independent of BC

While BSC and BC are interoperable and run in parallel, BSC is independent of BC. They will continue to operate independently, even if BC experiences downtime. Moreover, users have uninterrupted access to features on BSC.

Unlike Binance Exchange, BSC is governed by a community, which votes on different aspects that may affect the blockchain’s operations.

BSC supports this on-chain governance through the Proof-of-Staked-Authority (PoSA) consensus algorithm. This hybrid consensus mechanism allows network participants to stake their BNB coins and become validators. This allows the validators to verify transactions on the blockchain.

Participants who stake their BNB tokens also contribute to securing the blockchain and vote on community governance protocols. Since BSC runs the PoSA algorithm, the blockchain processes transactions faster unlike Proof-of-Work (PoW) blockchains.

BSC integrates the Proof-of-Authority (PoA) and the Delegated Proof-of-Stake (PoS) to implement the hybrid PoSA network consensus for the blockchain.

In this hybrid consensus model, a user who has staked their BNB is elected as a validator to confirm transactions. In turn, generating the blocks in a PoA style. So, the number of BNB tokens staked influences the validator’s reputation among other community members.

With PoSA, BSC can add new blocks every three seconds. When a validator whose proposed block is successfully added to the chain, they receive the transaction fees for the block as a reward.

Validators on BSC ensure that only valid transactions are approved. To achieve this security, the network requires a validator quorum. BSC elects 21 validators every 24 hours, choosing from the 21 nodes with the highest BNB stakes. These validator sets can also update the BSC network as required during ‘epoch’ periods.

Another way a BNB token holder can participate in validating transactions is by bonding their tokens with block validators. This staking process is known as delegation. Such bonded tokens improve the ranking of validator candidates. A user who bonds more tokens into the stake has an increased chance of being selected as a validator.

To disincentivize validators from bad activities like authorizing invalid transactions, BSC deploys ‘slashing’ – a penalty mechanism that exposes the malicious validator and makes their attacks very expensive to execute. For instance, the validator may lose their BNB stake.

Binance Coin, or BNB, is the native token firing on all cylinders in the Binance ecosystem. Here are some uses of BNB on the BSC blockchain:

Even with this salient feature, there are concerns of centralization given BSC’s ties with the centralized Binance Exchange. The BSC community is pushing to move away from that tag, given its name rebrand. 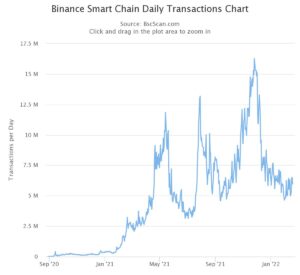 Number of Daily Transactions on BSC

BSC’s cross-chain compatibility, high throughput, low fees, and convenience make the blockchain a top alternative for many developers, especially on Ethereum. The blockchain has been a top gainer, among other platforms like Polkadot and Cardano, in drawing more developers to build on its infrastructure.

BSC is a fast and low-fees blockchain for users and developers looking to build DApps. Many projects are migrating to BSC to leverage the platform’s features. As a result, BSC has recorded a surge in daily transactions – with over 5 million transactions per day on average, in the year leading to February 2022.

The Fall of TerraUSD (LUNA)