What is Avalanche Network?

Avalanche network is an open-source blockchain platform that supports smart contract functionality. It focuses on scalability for faster transactions, low fees and environmental-friendliness. Avalanche is built to be dynamic and interoperable with other platforms and has a native token, AVAX.

According to the crypto tracker, CoinMarketCap, AVAX ranks ninth-largest cryptocurrency by market cap, as of February 18, 2022, at over $21 billion. (Note that crypto markets are highly volatile and figures may change)

Avalanche quickly rose to be among the top-ranking projects in a very short period. This is thanks to its revolutionary features that have attracted developers and users to its platform.

This guide will explain everything you should know about Avalanche, including how it works and what the AVAX token does. Lets jump in!

How Avalanche Differs from Bitcoin

Avalanche and Bitcoin’s operations stark contrast lies on their consensus mechanisms. Unlike Bitcoin’s Proof-of-Work, Avalanche deploys an innovative mechanism for optimizing the speed, scalability, flexibility of transactions. To illustrate, Bitcoin can process about seven transactions per second (tps) while Avalanche can handle up to 6500 tps.

Since its mainnet launch in 2020, Avalanche has sped up the development of decentralized applications (DApps) and other decentralized finance (DeFi) protocols on its platform. The blockchain focuses on bridging its ecosystem with other smart contract blockchains, like Ethereum. This allows for seamless interoperability across different blockchains.

But how does Avalanche really work to achieve all this? 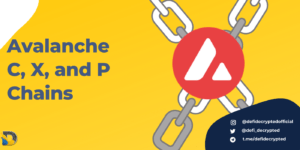 Each of the three blockchains is designed to exclusively operate on a specific task on the Avalanche ecosystem. This innovation enables the blockchain to process tasks more efficiently. As such, Avalanche boasts of a 1-second time-to-finality (that is, the time after a crypto transaction is considered final and immutable). This record time for transaction finality is arguably the shortest in all blockchains. In comparison, Ethereum’s transaction finality is about 1 minute.

Here’s a closer look at the three individual blockchains making up the Avalanche mainnet:

Each transaction on the X-Chain, regardless of the token used in the transaction, is settled with fees in Avalanche’s AVAX. X-Chain deploys the Avalanche consensus protocol and tokens managed in the blockchain follow its standardized protocol.

This EVM compatibility allows developers to deploy Ethereum smart contracts on Avalanche, to leverage the blockchain’s scalability and security features. Since developers can fork EVM-compatible DApps on Avalanche, more projects have seamlessly deployed a version of their products on the faster, cost-effective blockchain. C-Chain uses the Snowman consensus mechanism for its operations.

So, the P-Chain allows users to create Layer-1 or Layer-2 blockchain solutions using these subnets, with P-Chain as the default subnet. P-Chain also deploys the Snowman consensus protocol for its operations.

The Snowman consensus protocol works similar to the Avalanche consensus protocol, only contrasting by deploying linear checks on blocks instead of the random checks. Each consensus mechanism is designed to perform optimally on the blockchain it is deployed.

A subnet is a clone of the default blockchain connected to the platform. Users can create more clones, or subnets, as demanded. So, when a subnet temporarily reaches its scaling limits, users can generate another subnet to cover the traffic demands at the time and expedite transactions. Since there are no limits to creating subnets on Avalanche, the platform’s P-Chain can handle up to 4,500 tps making subnets key to achieving scalability on Avalanche.

Scalability: Avalanche blockchain is by far ahead of the two most popular blockchains – Bitcoin and Ethereum – based on transaction throughput and transaction finality. Higher processing capacity makes for convenient and reliable DApps that can compete with centralized apps.

Interoperability: Not many blockchains support cross-chain operations, especially deployment of DApps or smart contracts across different blockchains. With EVM-compatible Avalanche, developers can launch versions of their Ethereum-based products on the Avalanche network.

Usability: Avalanche is a ready-to-use platform that users find simple to get started. Many developers do not require special skills to start building apps on Avalanche. 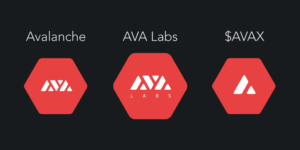 AVAX token is Avalanche’s default utility token that serves multiple uses on the platform including:

Avalanche Network is a deflationary token, meaning the coin’s supply is designed to fall over time through payment of transaction fees and burning other tokens from supply. AVAX has a maximum supply cap of 720 million tokens, with over 377 million tokens currently in circulation and at least 278,000 tokens burned.

Avalanche’s incomparable transaction speeds set the blockchain apart from the rest. The platform’s security and scalability features make it especially important in the DeFi revolution. As Avalanche continues to power the development of DApps around the world, it will become more accessible to developers and users in the fight against centralized finance.

The Fall of TerraUSD (LUNA)